When my daughter started Kindergarten, I was thrilled because she was lucky enough to have been placed in the class with the best teacher she could have had. Her name was Mrs. Hummel if I remember correctly. She was fantastic! She showed a genuine love for the kids and made every day a day full of fun and a lot of learning! SR was excited to go to school every single day!

In May that year, Mrs. Hummel arranged a fabulous Mother’s Day Tea Party and all the kids made special invitations for their moms. SR was so excited about it, that’s all she could talk about. All the kids made their moms paper mache wide-brimmed hats with pretty pink paper and artificial flowers adorned each one. We had tea and cake and the kids sang songs and gave their moms special cards for Mother’s Day. It was a beautiful day of appreciation. I still have that pink, wide-brimmed hat, too! I packed it carefully in a big box and had it shipped to Missouri when we left California.

In June, the kids (with the help of that wonderful Mrs. Hummel) planned a Father’s Day Brunch for all their fathers. I knew what was going to happen however and didn’t look forward to the event, not one little bit. The kids decorated ball caps with fabric paint. Honestly, I don’t recall much about that day except that it did not turn out as it should have.

SR was excited for her “Pop” to come to her classroom for the Father’s Day Brunch. I had made sure to tell CP about it and marked it on the calendar. Of course, he said, “I may not be able to get off work.” And I told him, “That’s why I’m telling your 3 weeks in advance. That way you can request the day off. SR is so excited about it and you need to make sure you go.” He said he would try and then went off to work. Every 4 days or so, I reminded CP about the Father’s Day Brunch. He ignored me as if I was annoying him or nagging him. It was important but he didn’t give a shit, obviously.

CP never said anything about getting the day off. I stopped mentioning it because I knew no matter what he wasn’t going to show up. The morning of the brunch, SR was jumping up and down and just couldn’t contain her excitement. I felt awful for her. I walked her to school and pulled Mrs. Hummel to the side and told her that if SR’s father didn’t show up, and if SR wanted to, to please have her call me and I would come to fill in. I didn’t want her to feel bad and be the only one there without someone. Just as I expected, I got a phone call and I headed off to the school.

I was so angry and hurt for my daughter that day. She didn’t seem to mind that it was mom and not Pop there that day. But I minded. He should have at least tried. After all that, my daughter still wanted her Pop to have the ball cap she made for him.

I was so angry, I didn’t speak to him for days, but I doubt he even noticed. What kind of a loser lets his child down like that? A rat bastard, that’s the kind.

Many, many years ago I was a little girl in Kindergarten. I loved my teacher. She was young and pretty and her name was Mrs. Libby. I loved school. Mrs. Libby made it fun and exciting to learn and it was fun playing with the other kids.

One of our lessons was about silkworms. I don’t recall how we got so many silkworms for our classroom, but some of the kids in the class were given a little cup with 4 or 5 silkworms in it, but only if we wanted to do it. Of course, I did. We had been learning about silkworms all week so I knew how to care for them once I got them home. We had a huge mulberry tree in our backyard and that’s exactly what the little silkworms ate!

I was so happy and excited to take these tiny silkworms home to watch them eat, grow and morph into beautiful silk moths. My mother let the wind out of my sails as quickly as I got into the car when she arrived to pick me up from school. She flew into a rage and I thought she was going to throw those poor little moths out in the parking lot! Her complaint was that I hadn’t asked for permission to bring them home, nor did my beloved teacher. I was just 5 years old and I was devastated that she was so angry about the little silkworms! I was allowed to keep them, but I don’t recall much about how that came about except that it was my responsibility to feed them and keep them from getting loose in the house.

It was exciting to me still, even after my mother’s temper tantrum, but I kept it to myself. I kept the little silkworms in a shoebox in my bedroom and never spoke of them, except of course to my Dad. He helped me reach the leaves in the mulberry tree that were too high for me since I was so small. Honestly, I thought my mother had hoped I couldn’t get any leaves at all so the little silkworms would die!

One day, the little silkworms spun their little cocoons and I was amazed and curious about what they were doing inside that I couldn’t see! I checked on my little silkworms day and night. I sat by my bed just staring, looking, hoping that the little moths would come out while I watched.

I don’t recall when they actually emerged from their cocoons, but I was thrilled to see them but yet sad to let them go! I knew I had to get them outside before my mother found out. I didn’t want to risk another one of her fits of rage for no good reason. I’m pretty sure I wasn’t able to put my 5-year-old feelings into words as I just did, but I’m positive the feelings were still there. 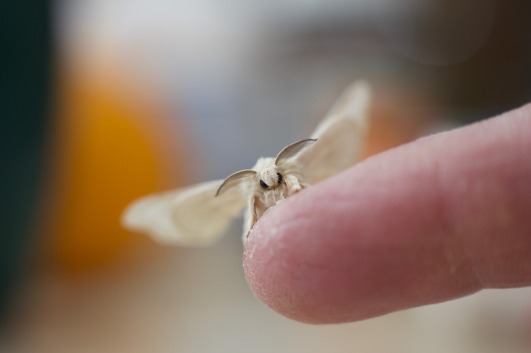 I waited for my Dad to come home so he could see the little moths, and he helped me let them go outside. It was so sad for my 5-year-old self to have to say goodbye. They fluttered and flew, right to the mulberry tree and at that moment I knew they were happy.

My son was born in 1990. He was long and skinny at birth, so my Dad stuck the nickname of Ichabod (as in Ichabod Crane) on him, which was later changed to the shorter version of “Ickie.” It was cute when he was a little guy, but when he started school we stopped calling him that. My daughter was asked to stop calling him that as well, and I explained why it would be better to call him by his real name, especially at school. She understood and was very good about it, believe it or not. No one ever knew what his nickname was until he was grown.

School was about to start and I was excited to have quiet time during the days now that both kids were going to be in school. The first week is usually a bit hectic, but we always survived. Thankfully, we had a competent bus driver who was always on time with pick-ups and drop-offs. That made things so much easier, not just for me but for the kids, too.

It was a quiet 2nd day of school. My sister, Sheryl had come for a visit so we were just lounging around, talking and just enjoying the day. We decided to sit outside for a bit and greet the kids as they got off the bus.

It wasn’t too long before I could hear the bus coming up our road. I told my sister, “You watch. Ickie isn’t just going to GET off the bus. He’s going to FALL off the bus.” He was the type of kid who was all-in. He did everything fast and with excitement! He was always on the go! Where my daughter was more laid back, he was busy, busy, busy!

Turns out I knew my kid better than I thought I did.

The bus stopped in front of the driveway. My daughter got off the bus first. Then Ickie, just as I told my sister, took a step or 2 down the steps of the bus and then FELL the rest of the way OFF! We laughed so hard — but not because he fell and could have hurt himself! We were laughing because I KNEW MY KID SO WELL!! He got up and dusted himself off, but he was crying. He had scraped his knee.

I gave him a hug and told him, “You really know how to get off the bus there kiddo!” He grinned and went inside. I felt bad for laughing but as I said, it was not AT him. I was laughing because just seconds before the bus stopped I had predicted exactly what was going to happen.

Don’t worry. If you think I should be ashamed of myself, rest assured my dear son has never let me forget that day! He will continue to make me feel bad for the rest of my life! Oh, I felt bad. I felt like a terrible mom at that moment. The thing is, I’m not perfect. No parent is. On the bright side, Ickie will have that memory of simpler times, when I could make him smile after a rough day. He’ll remember brushing himself off, getting back up and mom putting a band-aid on his knee just before his afternoon snack.

Oh, and he’ll have a story to tell his own kids someday.