Have you ever walked in your sleep? I have never…but my daughter did in her pre-teen and early teen years.

She would get up after a couple of hours of sleep, while I was still up watching tv. She always had a glassy-eyed look on her face and was in what seemed to be zombie mode. She would just walk into the living room and plop down beside me on the couch as if everything was perfectly normal. I’d say to her, “Are you ok?” No reply. Just a glassy-eyed stare and weird smile. This continues for several minutes.

“Are you hungry?” No reply. Just a glassy-eyed stare and weird smile.

“Do you feel ok?” No reply. Just a glassy-eyed stare and weird smile.

“Did you have a bad dream?” No reply. Just a glassy-eyed stare and weird smile.

“Do you have to pee?” No reply. Just a glassy-eyed stare and weird smile.

I tell her, “Get up and GO PEE!” She gets up to go to the bathroom. When she comes back she goes immediately to her room. As she passes, I say, “Goodnight.” She replies, “Goodnight.”

When asked about it the next morning, she’d never remember.

Do you have any funny sleepwalking stories? I’d love to hear them!

I was reminded this morning of a woman I knew as a child. I was a mere 9 years old and in the Girl Scouts, or maybe it was Brownies. It’s been quite a number of years so my memory is a bit foggy.

Mrs. Brown worked at the elementary school as a yard duty lady. She also volunteered to transport us girls when the Girl Scouts (or Brownies) went on field trips. She was a very nice woman and she was easy to talk to. She loved all of the kids and didn’t play favorites. She was very pretty, at least in my 9 year old mind. Maybe she wasn’t so pretty. The memory thing, you know. But there’s one thing I do remember quite clearly and that was Mrs. Brown’s daughter.

I don’t recall the girl’s name but she was a year behind me. Please know that I feel absolutely awful thinking this but that girl was hideous! She was the ugliest kid I had ever seen! She was skinny with crooked legs and crooked teeth. One of her eyes was a bit cock-eyed which I learned years later was commonly referred to as lazy eye. Her long brown hair looked as though she never brushed it, complete with what we called a ‘rat’s nest’. She was so ugly even a 9 year old girl like me recognized it.

Now don’t go being all bitchy at me for this because a) I was just a little girl and b) I was nice to her. I tried to hang with her on the playground because she didn’t have any friends. She seemed to be very sad all the time so I did things and said things to make her laugh. One day, I snuck a comb and hair pick out of the house (because they were my mother’s) and brought them to school so I could comb the ugly little girl’s hair. I shudder to think that we could have gotten lice but I had no idea at the time!

At recess, I brought out the comb and pick and started grooming myself and the ugly little girl said, “Hey, that’s neat. Is it a comb?” She was referring to the hair pick and I told her what it was called. I asked her if she wanted me to do her hair and that we could play hairdresser! She was thrilled. So, I combed her hair…little by little, first with the pick and then with the comb and then with the pick and so on and so on. This took 2 recesses but her hair was combed and I actually had the forethought to grab a rubber band out of my desk before the second recess so I could braid the ugly little girl’s hair. She was so proud of her braided hair and I told her she was pretty; I think she felt pretty, too.

I snuck the comb and pick back into the house when I got home from school that day and put them in a weird place so my mom would find them and wonder how they got there. I found out my mom went nuts looking for that hair pick because that’s what she used on her permed hair! I laughed to myself because I visualized my mom frantically looking for that damn pick and most likely all day long! I could tell when she found the comb and pick because I could hear her laugh from across the house. I pretended to not have a care in the world and ran outside to play!

Anyway, this morning I heard this song on the radio as I skipped through the channels and I couldn’t help but think of Mrs. Brown and her ugly little daughter. Of course, the words I heard in my head as the song played were, “Mrs. Brown, you’ve got an ugly daughter!” Enjoy the song!

I’ve always been good about stretching the dollar. When times got tough, I got tougher! (My kids grew up telling me I was cheap but I prefer the word frugal.) I knew how to get as many meals out of $40 as I possibly could, which is about all we seemed to have each payday when my kids were small. In fact, that $40 had to stretch for 2 weeks! Sometimes, after bills were paid, that’s all we had. Having 2 kids, I had to make sure I had food in the house even if it meant a bill didn’t get paid. That’s just how it was. I’m not going to make a $40 credit card payment (that belonged to CP) if we had no food. I had to feed my kids!

Food on my grocery list included milk and cereal, hot dogs, bread, peanut butter, ramen noodles, sliced cheese, chicken, and anything on sale. Back then our grocery store usually had chicken quarters for .29 cents a pound and they were packaged in 10-pound bags. That was a good deal! Sometimes they had beef on sale that couldn’t be passed up. I knew how to stretch a dollar so we could all eat!

One weekend, my Dad was coming down for a visit. He worked in San Fransisco at the time and he liked to come see his grandkids when he was off. He would be there about dinner time but all I had in the house was rice, 3 thin steaks, and frozen broccoli. I made a big bowl of seasoned rice, with thin-sliced steak strips and broccoli. It was the only way to stretch the steaks for 5 people. It was like stir-fry but not as good. There was more than enough for everyone, including CP, and he was a huge PIG.

We sat down to eat and all was going well until Dad reached for the bowl for seconds. CP had seconds, and the kids were still eating their first serving. CP watched my Dad serve himself another helping and CP got this look on his face which I recognized and knew all too well. He had something stuck up his ass and I couldn’t figure out what the hell it was! Then it dawned on me. Dad doesn’t care much for rice, so he was trying to get a little more meat and broccoli without too much more rice. I just knew in my gut that CP had a problem with this.

He was still in a pissy mood later so I asked him what the hell was wrong because I noticed his attitude change during dinner. Sure enough!  He said he didn’t like how my Dad was picking through the dish for meat and broccoli. He said, “Someone else might want more and he was picking all the meat out.” I explained to him how Dad doesn’t care much for rice. I also told him, “You already had seconds and you were done eating. You were just finishing your beer. You were DONE. I was DONE. The kids weren’t going to eat anymore. I DON’T SEE A FUCKING PROBLEM!” He changed his tune. He knew he was being an asshole, plain and simple.

What irritated me the most I think, was the fact that Dad always helped us with groceries when he came down and he helped with other things, too. Dad even brought the beer that CP was guzzling at dinner and afterward, so for him to have such an attitude just made me want to smack him with a cast-iron skillet. It’s probably a good thing I didn’t have one back then!

Today, I ran across quite an amusing memory from a few years ago on my Facebook feed. I thought I’d share it because it gave me a hardy chuckle. I hope you do, too!

Today, I took Dad to see his urologist for his annual check-up. He was called back fairly quickly, leaving me to read a magazine in the waiting room. While I was thumbing through articles, an older man came in and announced his arrival to the receptionist. He then asked, “Where’s the bathroom?” The receptionist replies, “We are going to need a urine sample from you today.” He says to her, “Well, I’ll just give you my underwear.” It caught me off guard and I laughed out loud. It was the funniest thing I have heard in a long time! The receptionist tells the man, “Since I really don’t want to wring out your underwear, I’ll take you back right now.” Gosh, the things you hear when you leave the house!!! 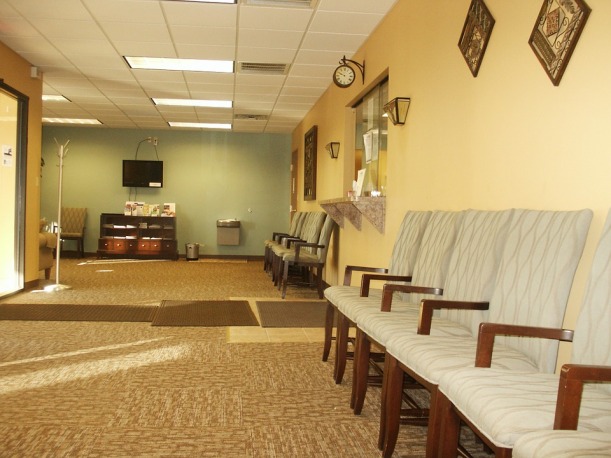 This photo was probably the last photo taken with any of my cousins. It was 1987, the year my Papa passed away. He was my paternal grandfather.

I was pregnant with my first child, second from the left. Yeah, that’s me. Young. Thin. The last time I would ever be thin in my life! Even pregnant, I had only gained 27 lbs. total and still looked good. I just wish I would have known that then.

What strikes me about this photo is the fact that everyone is smiling except for me and my sisters…well, maybe there’s a tiny smile there, but not really. I don’t recall, and most likely have blocked it out for good, but I’m sure our lack of enthusiasm had something to do with my mother. Granted, funeral services aren’t supposed to be fun but it was usually my mother who sucked the wind out of our sails, made games UNfun, and mountains out of molehills.