This past week has been a busy one. With Christmas baking and (a little) decorating, also came a big veterinary bill.

The Thursday before Christmas, Jack came in from his usual daily outing with a bloody foot and more damage than I first thought. I’m pretty sure he tangled with a stray cat. He was obviously in some pain and favoring both legs on his right side. I was especially concerned about the front leg because he was not bearing weight on it at all. I thought maybe something was broken or dislocated. I was lucky enough to get an appointment the very next day – I didn’t want him to suffer through the holidays. I knew it would be at the very least the Wednesday right after Christmas before I could get him in again. So off we went to the vet.

We have been to this vet clinic several times and have only seen the one vet, Dr. Missy. She wasn’t available that day so we got to see Dr. Ritchie. This Dr. Ritchie was old and seemed like he should be retired, in my opinion. Now, don’t get me wrong. I’m not against people working well into their 80’s but he just didn’t seem to know what he was doing.

First, I told Dr. Ritchie about my concerns. He felt of the legs. I had to point out all the wounds because he couldn’t find them. That’s not all he couldn’t find. He went to take Jack’s temperature and was holding Jack’s tail up and poking around back there… After a couple of minutes, I asked, “Is there a problem back there?” Dr. Ritchie said, “No. I just can’t find the bullseye,” and it wasn’t until he took his glasses OFF that he found it. Poor Jack probably wondered what the fuck that strange man was doing back there.

Jack got an antibiotic injection at my request because it’s hard for me to give meds with my mobility issues. So, home we went but I wasn’t feeling too confident about Jack’s condition.

The day after Christmas, I called and got another appointment. This time with another vet I was not familiar with. Dr. Missy was booked. We saw her husband instead. He seemed to have his noodle in working order. Jack had no broken bones or dislocated joints, thank goodness. However, there was one wound located in the crook of his elbow – if that’s what it’s called in feline anatomy, I don’t know but close enough – where the muscle had been punctured resulting in so much pain he wouldn’t bear weight. We ended up with 4 x-rays, an anti-inflammatory fast-dissolve pill, and another antibiotic – in liquid form, yay. Why so many x-rays, you may be wondering? Jack has an oddly formed clavicle unlike any other the vet had seen before so he wanted to make sure it was the same on the other side. It was. I just have a weird cat. Another weird cat, I should say.

It’s been hell trying to give that cat his meds! I can’t believe how strong he is! But we are getting the meds in him and he is finally starting to bear weight again. He uses it some, he limps a little, and then he’s back to hopping with that one foot up. It’s progress. He’s becoming more and more restless each day. He wants back outside and he doesn’t know it yet but he will be an inside cat only from now on. 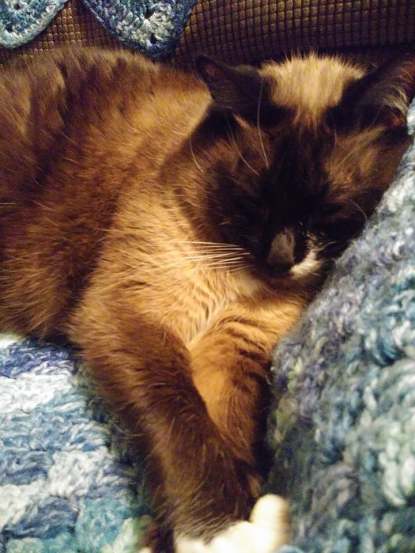 “Kitty” is her name, yes. She’s 12 years old this month! She’s not feeling well so she has to go to the vet tomorrow for an overnight stay. She’s never been away from home like this so I’m sure she’ll be scared. I’ll worry about her all night long, but it can’t be helped.

This morning I noticed a little blood and mucus in her stool so she’s going to have some blood work done, and be given a couple meds as the first round of treatment. Hopefully, that’ll be the end of it and she can come home with a clean bill of health. I’m praying for the best but preparing for the worst. I’ve lost 2 elderly cats since Feb. 2017, and Kitty is no spring chicken. Losing my furbabies is hard as hell.

I may be taking some time off of my blog and social media to take care of Kitty and tend to other things. There’s a lot going on this month. Details later! I’m feeling the stress already and by month’s end, I’ll be in a straight jacket! Hahaha!