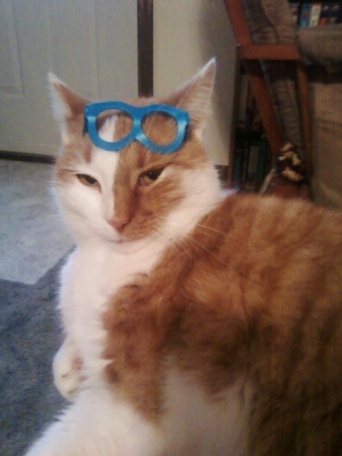 This is Mr. Potato Head’s Cat, Korn. “Yes, that’s Korn. Korn with a “K” and you have disturbed my slumber.”

This morning the phone rang and woke me up. I let the machine pick it up. I decided I’d better get up and see who it was. I put my glasses on and crawled out of bed.

Message important, but not urgent.

I guess my grandson, D.M., was shocked to see that I had my glasses on already. Usually, when I crawl out of bed he reminds me that I don’t have them. He uses sign language mostly – some that I taught him and some that he created himself. His sign for glasses is putting his hands over his eyes. He made this sign and then made the sign for sleeping, which is his head resting on his hand. I told him, “Yes, I have my glasses on. I don’t wear them when I sleep.” Then, just to be funny I asked him, “Do you wear your glasses when you sleep?” He cocked his head to the side (like a puppy) and looked confused. “Uh oh,” I thought. I’ve confused him alright!! He then ran to his Mr. Potato Head pieces and grabbed up Mr. Potato Head’s glasses and put them on his own face! Soon after he was trying them on the cat. Poor Korn. He’s a ‘good ol’ boy’ and really doesn’t mind being bothered, but doesn’t he looked thrilled?