I can deal with cleaning clutter, wiping cabinets, organizing, vacuuming, even cleaning toilets. The thing I hate to do the most is DUSTING! I hate it. Seems that no matter what you do, that damn dust always comes back – sometimes the very next day! It’s especially bad when you live out in the country like I do.

As I’ve mentioned before, I’ve been cleaning and decluttering for the past couple of weeks. It’s rough when you’ve got pain and mobility issues. I do a little, rest a little, do a little more….one chore at a time, and sometimes only one chore a day. Today, I tackled the cube shelving in the laundry room. The dust was so thick under the clutter, even the cats were sneezing!

I threw away a bunch of stuff I have no idea why I was even saving. Forgot I had it, haven’t used it in years…..why keep it? Some things I saved for the youngn’s. I figure the old air popper, single serve coffee maker, and a set of ceramic canisters could be useful to one of them. I’m not using them after all. No telling what I might find the more I delve into this cleaning and decluttering project – a project I’m not sorry I started, at least not yet.

Someone suggested I put the unwanted stuff in the yard with a “free” sign on it. I might try that later in the Spring. Right now it’s too wet out. I can’t even begin to tell you how many things I’ve tried to give away in the past, absolutely free and no strings attached except it must be picked up – I have even offered to deliver to certain places if I had a reason to go that direction – NO TAKERS. What the heck?? We’re talking old televisions that still worked, chairs, heaters and fans that still worked, adult and children’s clothing in good condition…. The televisions were the old kind but still worked! I figured it’s better than nothing if someone needed a tv to hold them until they could get a better one. I guess I was wrong.

Anyway, I’m taking it day by day. I decide every morning what I’ll tackle that day. Some days I may not even do anything. It might take a year to finish, who knows. I will get it done if it kills me…. I just wish someone else would do the dusting! 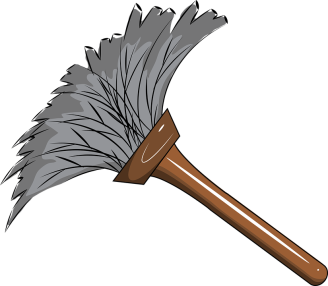 What are your least favorite chores to do?

11 thoughts on “The Worst Chore Ever”