Last night was an interesting night. It started off like any other night. I was crocheting as Dad and I watched the new FBI series. At one point I heard an odd noise and tilted my ear toward the back of the house. Dad asked if I heard something and I told him I had, but that I couldn’t be sure what it was. It wasn’t a worrisome noise and I didn’t hear it again, so it was forgotten.

Fast forward to around 12:40am. I was still watching tv and crocheting. It was actually more crocheting and listening to the tv. All of a sudden, I hear something jump onto the window a/c by the window where I sat. I thought, Oh crap. Another stray cat. I moved the curtain to the side slowly so not to frighten this stray cat, and lo and behold it was NOT a stray cat after all. It was Jack!

Jack comes in at 4pm feeding time and he is not allowed to go back outside because he’s such an asshole to get back in before dark. So, he WAS inside. As I got up to let him in, I asked him, “How the hell did you get outside?” Of course, he didn’t tell me. He thought it best if I figure it out for myself!

My first thought was that he must’ve found a way out of the “catio.” Sure enough, a quick look with the flashlight showed the exact spot where he made his escape. It’s not the best enclosure but it keeps my furbabies safe at night from coyotes and other such terrifying creatures of the night. Of course, if a bear wanted a cat bad enough he could easily rip that catio plumb off its base. But by then the cats would have all scattered back into the house and under my bed. 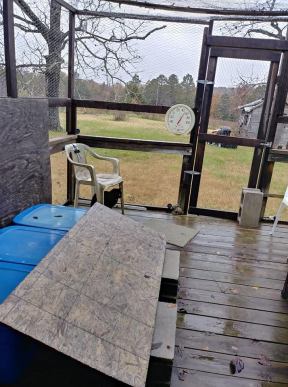 Covered litter boxes with a board to protect the openings from rain and snow.

Shelter (originally a dog house) they sometimes sleep in.

So, what’s a cat-mom to do? I couldn’t do anything about it that late and in the dark so I blocked off the cat door where they couldn’t go out there at all. I didn’t want Jack to escape again as I knew he would if given the chance. I knew Kitty wouldn’t even attempt to escape as she rarely goes out on the catio, and I knew Honey couldn’t escape even if she wanted to because she’s just too damn fat to climb up to the opening. Alice is another story. I didn’t know if she would try or not. I didn’t know if she would follow Jack, and I’d never find her in the dark. (She’s black as night.) Besides, she’s the best cat I have and I would die if she got lost in the woods. So, none of them got to go out on the catio.

That didn’t go over well. Alice and Jack meowed and scratched until after 1am until they finally gave it up and went to sleep next to me. It took putting the vacuum cleaner next to the blocked opening to get their little furry butts settled down!

Oh, and that odd noise I heard earlier? I think it might have been Jack forcing his way through that opening in the wire. I checked him over pretty good to make sure he didn’t hurt himself and there was no blood or bones poking out. He got lucky. If I had gone to bed before he jumped up on the a/c, then I’d have never known he was out in the scary dark!

They are happier now that Dad repaired the hole, even though it’s raining today. They go out under the board or in the shelter and they’re good to go.

My silly (yet annoying) little furbabies, how I love them so.

7 thoughts on “The Escape”