I don’t do much cooking these days unless it’s quick and simple because I just can’t stand in the kitchen anymore. Actually, I’ve discovered it’s not really the standing. It’s more the moving back and forth, side to side, gathering the things I need that really takes its toll. But I digress.

I make a lot of soups when it’s cold out. Sometimes I use the crockpot but when I want to make a big batch to freeze in portions, I cook it in a big pot on the stove. I think I made my last batch of soup for this year because it seems to be warming up quite nicely.

When I first wanted to find a recipe for a good Mexican soup, it was after I had been to a restaurant and had a bowl of delicious enchilada soup. Not knowing the difference between enchilada soup and tortilla soup, I looked it up. I was even more confused after that! Some folks said that tortilla soup is thinner and broth-based, while others said that it was thickened with masa harina. Some folks said enchilada soup was a cheesy, thick soup with enchilada sauce. One has corn, the other hominy. One is spicy and one is not. One tortilla soup recipe had beans and corn while enchilada soup didn’t. To make matters even more confusing yet another site said just the opposite! Well, pffttt….. What was I to do? I decided to just wing it.

I knew I didn’t want a really thick soup. I looked up several different recipes for each soup and decided what ingredients I wanted to put in mine. My recipe is for a thinner broth-based soup, with beans and corn, Mexican spices, lime juice and topped with crushed tortilla chips and shredded cheese! You can make this in the crockpot or on the stove, totally up to you!

You can call this enchilada soup or tortilla soup. You decide. I call it Chicken Tortilla Soup. The best thing is, you pretty much just dump it in the pot! I hope you like it!

First, in about 2 tsp. of salad oil, cook your chopped onion on medium heat until tender. Add the garlic and cook for just a couple of minutes. 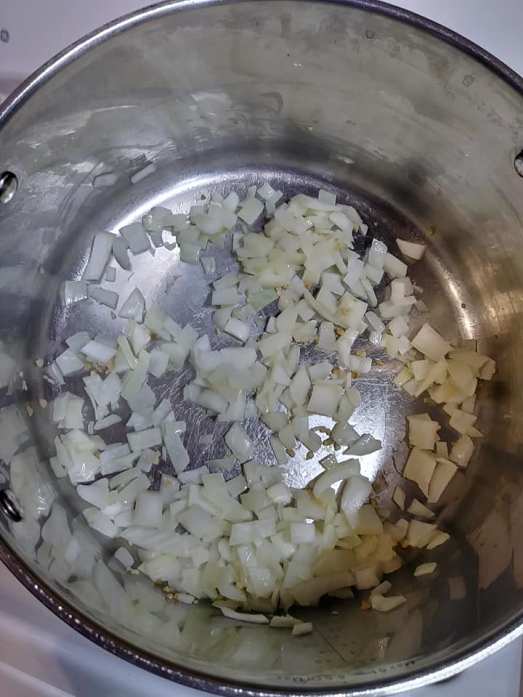 Now, add all of the beans, the corn, green chilis, tomatoes, and enchilada sauce. Throw in the shredded (or chopped, doesn’t matter) chicken breast and all of your seasonings.

Almost done! Add your chicken broth and mix well. Let your soup come to a boil and then let it simmer for about an hour. After that hour, add the lime juice and stir. Let it come to a quick boil again and it’s ready to serve. Don’t forget the yummy toppings!

Note: You can increase or decrease the amount of spices and green chilis if you prefer.

I’m already missing my soups, and Winter just ended! What am I going to do?! I’ll have to find some new recipes to tweak and make my own, I guess! I hope you like this recipe! It’s one of my faves!